honeymooners in maui : road to hana

Posted in OUR TRAVELS

It turns out, honeymooning is really really really really really really fun. Our wedding week fell during our busiest, most full season for wedding photography (as in, we flew straight from our honeymoon to shoot our friends’ wedding in LA). Add to that the fact that I’ve literally never taken a trip that didn’t include work of some sort, and I was legitimately nervous that I wouldn’t be able to relax. 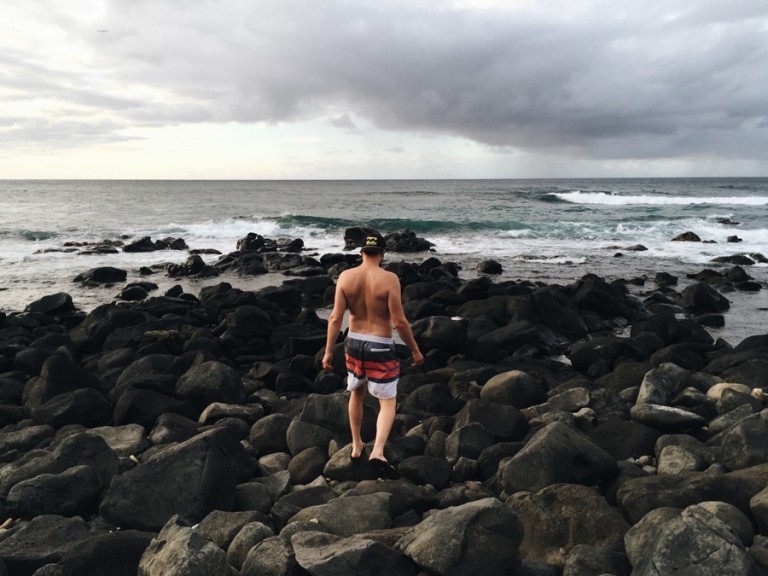 Haha, YEAH RIGHT. I forgot what day of the week it was the moment we landed in Maui.

It’s also super hilarious because I remember telling someone we picked Maui “by default” because it’s easy to get to from the west coast, we used airline miles to book our flights for free, and it was one place we’d both never been. BUT, WHO SAYS THEY GET TO GO TO MAUI BY DEFAULT?! As soon as we got there I realized, “Oh yeah, no, this is heaven” and now I’d like to apologize for understating that to anyone ever.

When we landed we rented a Jeep and headed out to our first airbnb near Paia. (But first, we got gelato and ate at Paia Fish Market because priorities.)

We’d decided to divide our 7 days into one big road trip so that we could see the whole island. We’re not the kind of people who enjoy sitting at a resort for a week, and we wanted to see everything. We stayed the first couple of nights at a really remote airbnb on the Hana Highway close-ish to Paia because it had a jacuzzi. haha. It was there that we discovered the greatness that is Maui Revealed. If you’re going to any of the islands at any point in your life, buy their guidebooks. Our host had one that I decided to browse one day, and we took it everywhere with us from that point on. I’d say 99% of our decisions we made in this post were guided by that book. And when we had to leave it behind, I cried. (Nahhh, but I did take pictures of every single page of the beach section for future reference.)

Our first morning we’d decided to head to the Haleakala Crater for sunrise. We’d read a ton of suggestions to do that our first morning there because the time change makes the 4 a.m. wake up call a little less brutal. It still felt crazy early and we had a long drive, but HOLYMOLY. So freaking worth it. 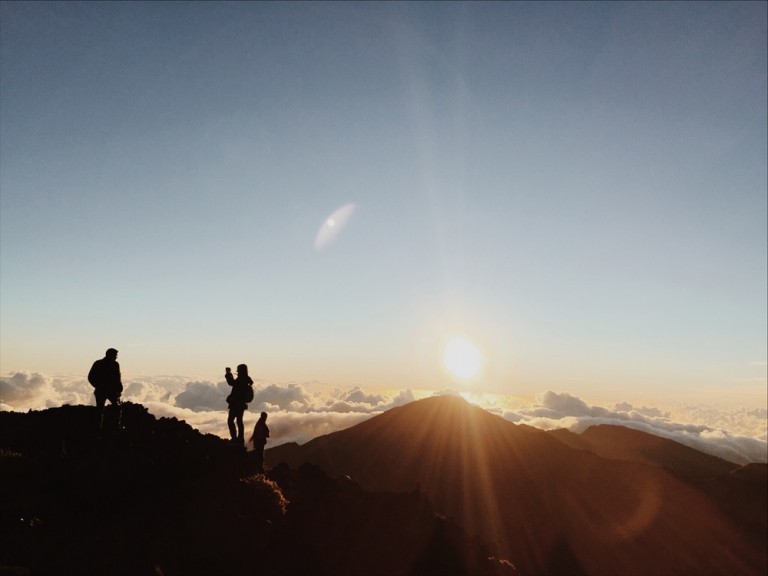 My brain still doesn’t feel like it can compute that kind of beauty. It was surprisingly crowded and we got one of the very few last spots in the parking lot–definitely leave early early early. And it turned out that we got one of the best views ever. We were totally above the clouds and it felt like we were watching the sun rise on Mars. We also heard tales of people going up three different times on their trips and being in the middle of a cloud every single time. We lucked out big time.

We found a little breakfast place called Kula Lodge on our way back to our airbnb and it was soo cute (and we were soo hangry). One thing we learned early on was to pack snacks everywhere you go because you never know where exactly food will be or if it’ll be open. And food was also really expensive. haha.

That afternoon we started our great Maui beach search. Before this trip, I was 100% not a beach girl. I’m kind of super terrified of the ocean and just was never interested in conquering that fear. But for some reason I got soo obsessed on this trip. I think we ended up going to 13 different beaches in our 7 day trip. It was so fun to be able to experience all the different cultures surrounding each beach–from the super touristy ones to the locals-only spots to the little hidden gems you had to trespass a little to get to.

Our favorite spots during these first couple of days were definitely Paako Beach (also called Secret Cove Beach) and Maluaka. The surf at Maluaka was perfect for boogie boarding without feeling like I was going to die and a sea turtle swam right up to my feet and scared the crap out of me (but also–AWESOME!). And Paako Beach is such a fun adventure. You walk up to some peoples’ houses and there’s a little passageway between their stone walls dividing their houses–then BAM. You’re in this beautiful little cove. 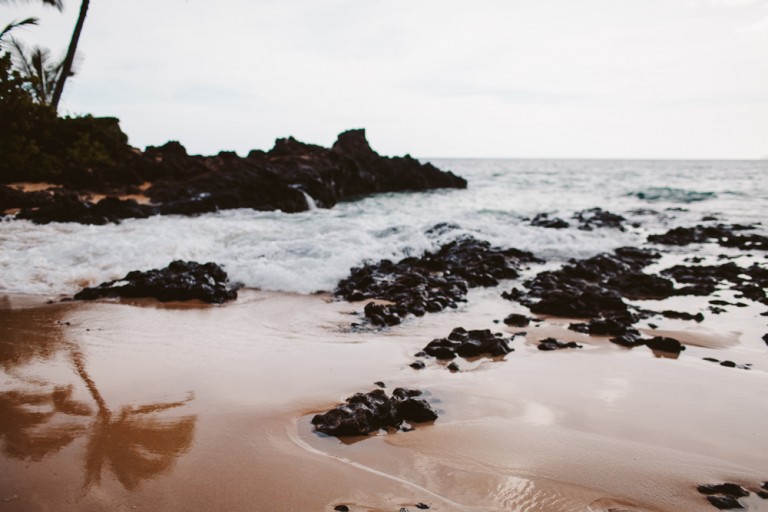 After three days, we said goodbye to our little jungle house and started our Hana Highway adventure. There are a million different opinions on how to do the Road to Hana, but we basically decided to write down the mile marker of everything that sounded interesting in our guidebook. If we found it, great! If not, great! There are hundreds of sights to see, so we just wanted to enjoy the drive and see what we could.

Again, we totally lucked out! There had been a ton of precipitation, so waterfalls were bustin’ at the seams. It felt like we didn’t even have to stop to get really cool sights. So we just pulled off where it felt convenient (or where there were intriguing roads) and tried not to crash into all the other cars on the teeny, windy roads. Our favorite spots turned out to be a lot closer to Hana. We stopped for a while at the Black Sand Beach and wandered around. It was such an intriguing place–it was lime greens and black and aqua everywhere. We also went up on these little cliffs and the waves were crashing up and creating these little blowholes that were sooo cool. And fun fact–the sand is actually more like little pebbles! 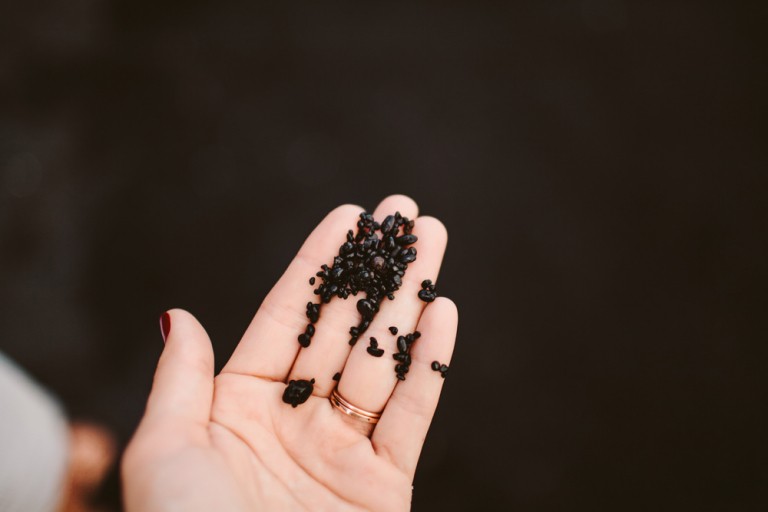 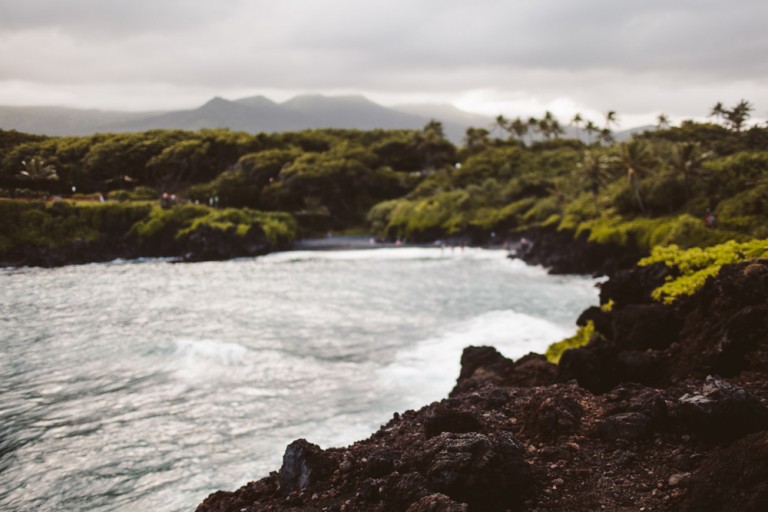 We planned on staying at airbnbs for the majority of our trip, so for our one night in Hana, we splurged on a night at Travaasa. While we were really glad we’d decided to stay away from the hotel / touristy places for most of the trip, it was soooo niceee to stay at such a cool resort for a night. Hana is so different from the rest of the island. It’s so quiet and calm, and Travaasa wasn’t the resort feel I’ve experienced before. All their rooms are little bungalows, and they upgraded us to an ocean view suite for our honeymoon, which was soo rad. That night we watched the sunset over Hana Bay, popped some champagne, swam in the pool, and read out on the deck–aka relaxation station. In the morning, we woke up early and did yoga in the most beautiful setting ever before we headed back to the bungalow to eat breakfast and pack up to head out on the rest of the Hana Highway. 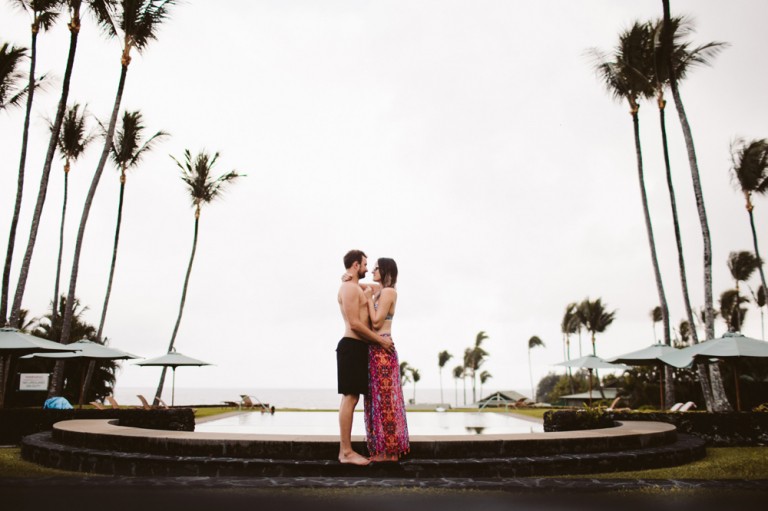 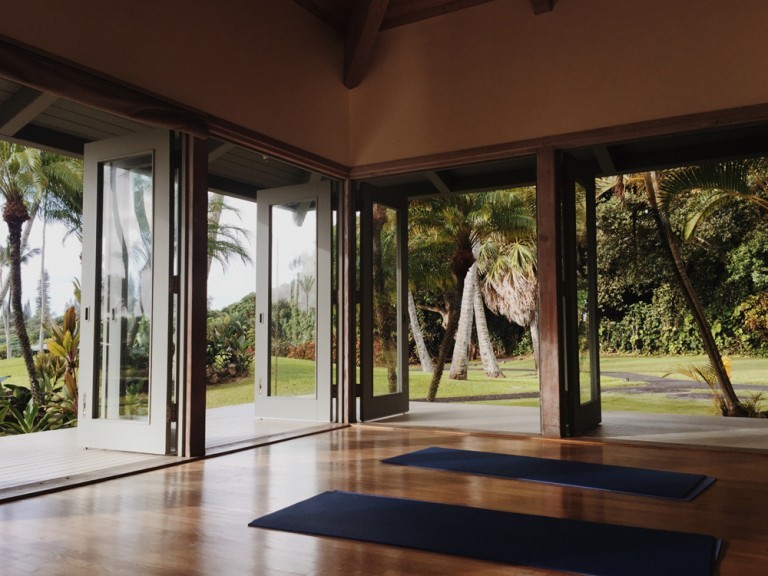 We heard that the trail to Red Beach was a little sketchy to get to now because of a landslide, but it was right adjacent to Travaasa’s property and we knew we had to at least try it out. Omg–we are so glad we went. I didn’t wear a swimsuit because I thought we’d just stop by and take a few photos, and when we got there I instantly regretted it. The water was soo blue and it felt like we found another planet. 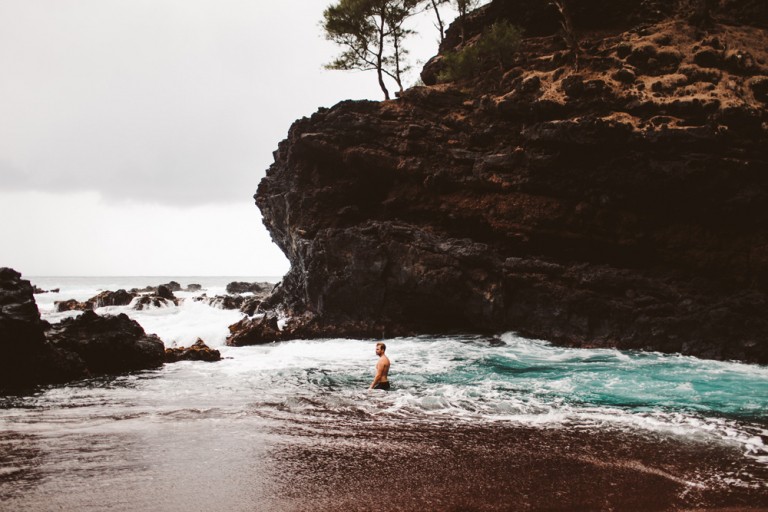 The second half of the Hana Highway was my absolute favorite. We popped by the Seven Sacred Pools, which I think would be awesome if the water hadn’t been so high. There were signs everywhere saying not to go to go down to them because of the water levels and it looked soo scary down there. We also explored the bamboo forest, but not too deep because time + mosquitos. haha. 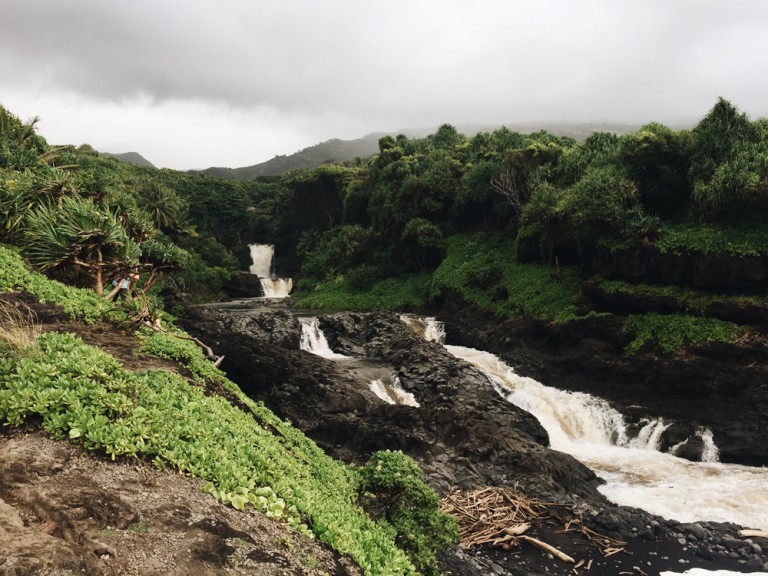 After the pools, the highway opens up to a way smoother, wide open road, and it was soo beautiful. Jungles are awesome, but I’m a wide open spaces kinda gal. Plus, it helped with the car sickness. haha. 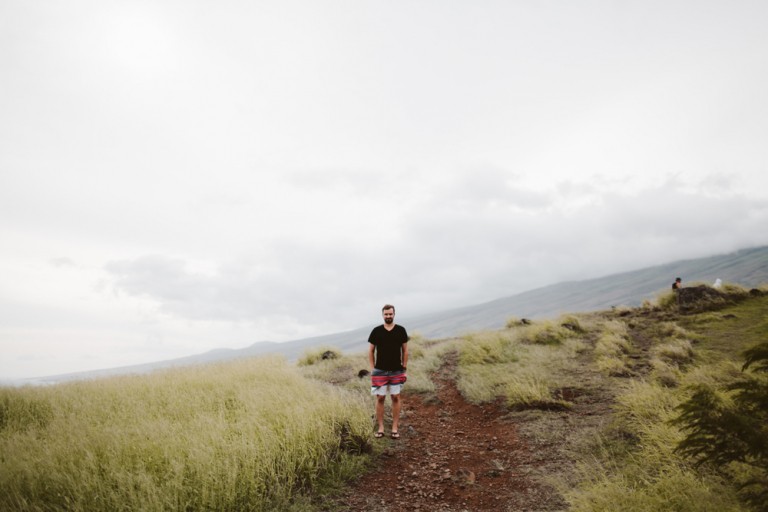 For our last three days, we took it a lot easier. We stayed at a little condo in Lahaina, did a little snorkeling tour at Molokini Crater and searched out all the beaches within reach. Honestly, our only regrets were not eating at Paia Fish Market every chance we got. We tried out a lot of other restaurants, but every time we were kinda underwhelmed. Mama’s Fish House was really good and totally worth the hype, but everything else was kinda, eh. I’m a big fan of not eating the same place twice on a trip, but next time that is going out the window and we’re eating fish and chips every day. Cool? Cool. 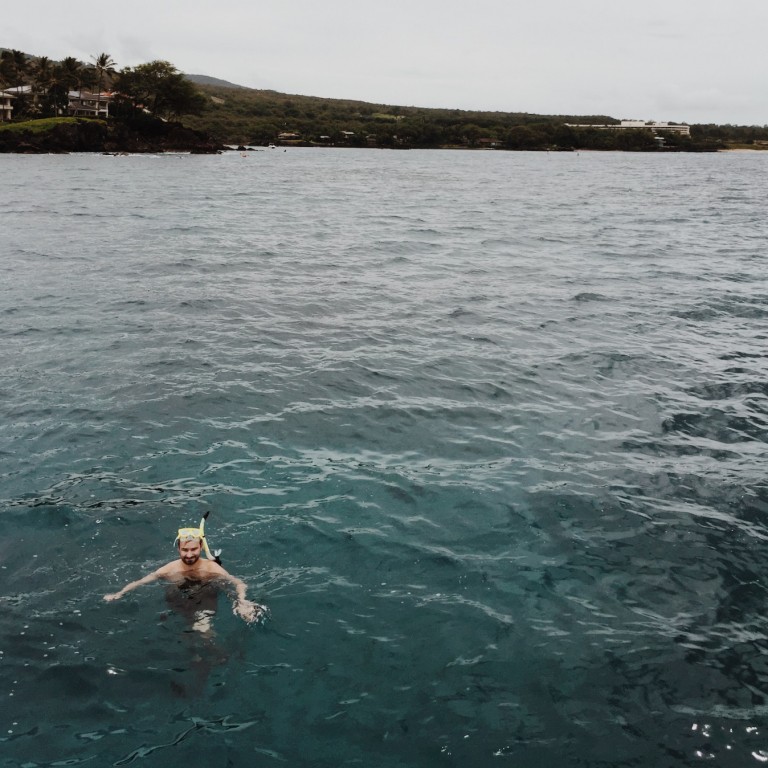 Our final night, we decided to get all dolled up, chase the sunset, and find a spot to re-read our vows to each other. Sooo romantic. What ended up happening was us rushing out of the condo to beat the sunset and pulling off our car at the closest secluded waterfront we could find, trying not to fall on the rocks, a man offering to take a photo of us that turned out completely blurry, and us reading our vows and saying, “COOL! Let’s grab dinner!” haha. It’s still one of our favorite memories and we’ve talked about how we want to re-read our vows to each other every year–no matter where we are or how romantic it is or isn’t. Because MARRIAGE.

Siiiiiighhhhhhhh, I’ll say it again. Honeymooning is funnn. Taking a week off of life to enjoy vacation with my fella–maybe we should make it a habit.

We absolutely want to go back, so let us know anything we missed!
xoxo, allison

« OUR WEDDING DAY | part twoa year ago : our proposal » 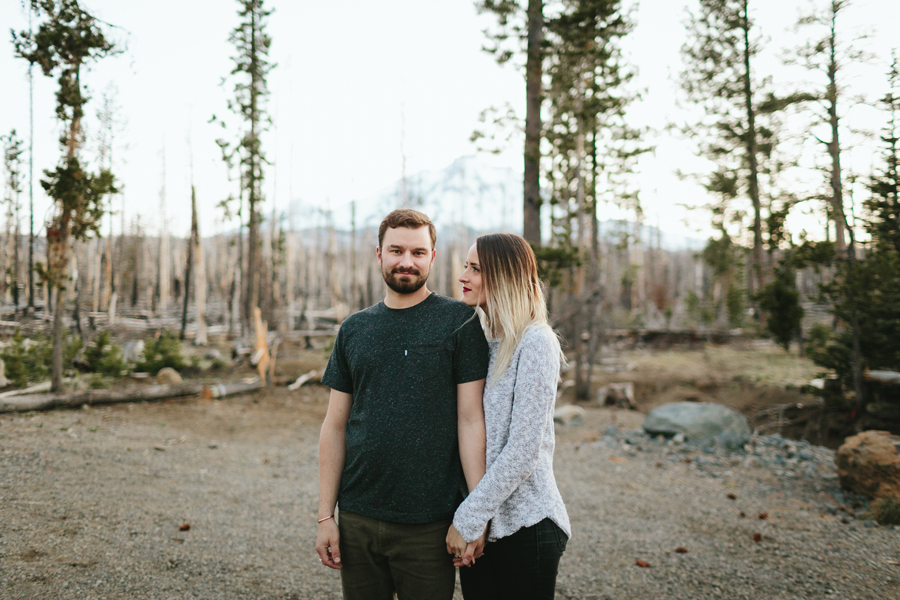 We are Johnny & Allison--photographers and newlyweds living in Bend, Oregon. Welcome to our little personal project, a travel journal of sorts. If you're new, start HERE. And also, hi hello hello.